Catani Gardens is boarded by Jacka Boulevard, Beaconsfield Parade and Pier Road in St Kilda. There is a pedestrian ramp into the gardens from the Upper Esplanade that overpasses the Jacka Boulevard roadway.

Paid and restricted street parking is available along Beaconsfield Parade and Pier Road. Check signage and metres for parking restrictions or call ASSIST for specific parking information on 03 9209 6777. Private underground parking is available in the St Kilda Sea Baths complex. 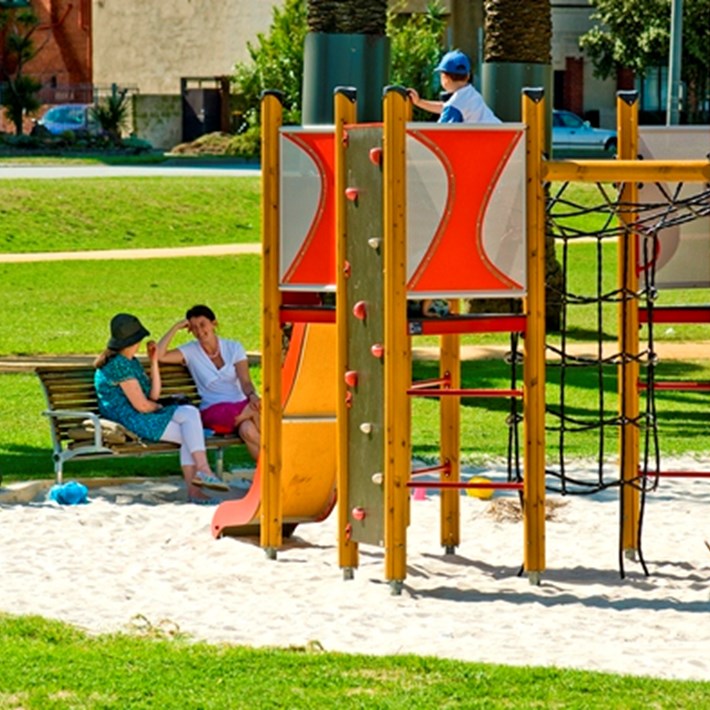 Historic boulevards of Canary Island palms trees line the walking paths and visually define the gardens. Events are common in the gardens and weekend pony rides are popular with families.

Luna Park, St Kilda Beach, the St Kilda Sea Baths and St Kilda Pier located to the east and the wide expanse of the West Beach precinct on the adjacent side of the gardens are easily accessible from Catani Gardens. Fitzroy Street offers abundant restaurants, eateries and entertainment options and the Acland Street shopping precinct is a short walk or tram ride away.

Dogs are not permitted off leash. Penalties apply.

Parking restrictions apply in the surrounding roads and streets. For specific parking information, please check the parking signs for full details or contact us.

Heritage listed Catani Gardens is named after its Italian born designer, Carlo Catani, a prominent landscape designer in the late 19th century. The original 1910 lava rock wall encloses the park on the west boundary, extending from the edge of the Gardens along the southwest boundary and past the Royal Melbourne Yacht Squadron. It incorporates a number of openings into the Gardens and onto Pier Road for access to the beach.

Several memorials and statues commemorating civic, war time and historic events sit within Catani Gardens. The Sali Cleve drinking fountain was installed in 1911 in memory of Cleve who designed the gardens on the corner of Beaconsfield Parade and Fitzroy Street and which carry his name. The statue of Captain James Cook FRS, RN was installed in 1914 and is a replica of the one at his birthplace at Whitby in England. Also sculpted by Sir John Tweed, this local statue was donated by St Kilda philanthropist Andrew Stenhouse. The plaque on the pedestal bears the names of the crew of the HMS Endeavour.

The St Kilda Cenotaph was designed by G H Alsop and was erected in 1925 as a memorial to St Kilda's fallen servicemen and women. A bronze bust by Wallis Anderson of Vice Admiral Sir William Rooke Creswell KCMG KBE, recognised as the father of the Royal Australian Navy, was first installed in 1938 and reinstated in 2011 by the Victoria Division Navy League of Australia.