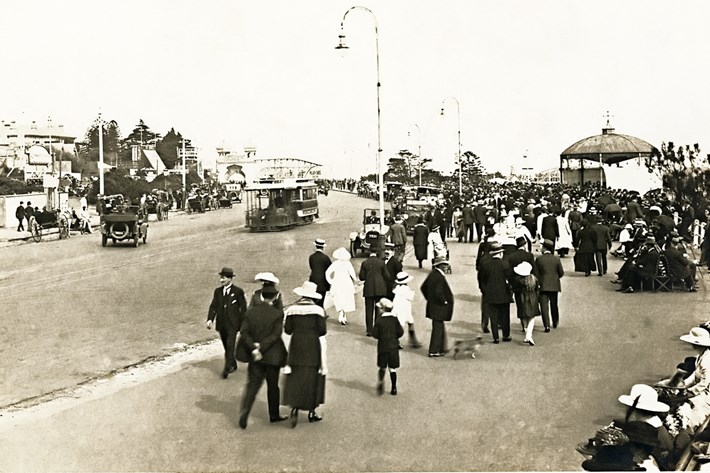 Access to our art and heritage database is available for research and reference.

This is a free program of monthly walks that explore the heritage treasures of the City of Port Phillip. Join our knowledgeable walks leaders as they share the cultural, architectural, art and social histories of the places that we call home, and tell the amazing stories of the people who have lived here.

Visit guided walks in Port Phillip (bookings essential at Trybooking) to see what's coming up online or in person.

Choose a self-guided walking trail brochure from the list below and take a journey into the cultural heritage, past and present of the Port Phillip area.

The Heritage Recognition Program comprises blue plaques installed on important buildings or at places whose historical significance may no longer be evident.

There are currently 58 plaques installed across the City.

If you would like to nominate a site please review the Heritage Recognition Program Guidelines then email your nomination to artheritage@portphillip.vic.gov.au

All nominations are reviewed by Council's Cultural Heritage Reference Committee.

The City of Port Phillip has a rich mercantile history which is reflected in painted (ghost) signs on private and commercial buildings throughout the municipality. We are documenting these old advertising signs, and need your help!

Here's what to do if you find a painted (ghost) sign:

If you notice a sign in bad condition or that has been vandalised please let us know.

In 2014 and 2015 the locations, dimensions and conditions of thirty-two signs were recorded and the data uploaded to the Heritage Centre’s Historypin page.

We did this with heritage specialists, community members, and staff and students from The Grimwade Centre for Cultural Materials Conservation (GCCMC) at the University of Melbourne.

Emerald Hill the site on which the South Melbourne Town hall now stands, was a significant ceremonial and meeting site for First Nations traditional landowners, the Bunurong and Wurundjeri Woi Wurrung, prior to European settlement.

South Melbourne or Emerald Hill as it was known till 1883, with its proximity to the City and the Yarra river developed early in Melbourne’s history as a manufacturing and industrial hub. From 1860 Clarendon Street was the main commercial street in South Melbourne. It was the central point for banking, auction houses and property dealers, furniture and household goods, drapers, bootmakers, grocers, butchers, dairy produce, and hotels.

Clarendon Street Stories is a self-guided walk that gives a snapshot of 19c South Melbourne. You'll learn about its mercantile, architectural and social history.

Photographs and archives from the Port Phillip City Collection, provide the historic background and the hidden stories of Clarendon Street’s businesses and traders.

Explore the walk in person and visit some of these historic shops and sites. Then stop for a drink, a meal or even some ice-cream.

Walking in their footsteps: local stories of World War Two

This map shares some of the diverse stories of life in Port Melbourne, South Melbourne and St Kilda during the war years. On these streets you can discover the impact of war on domestic life, local industry and manufacturing, the presence of armed forces, vital contributions to the war effort through coding, communications and succour, and memorials acknowledging service and loss.

Through research, publication and exhibition these not-for-profit volunteer based organisations increase our knowledge and understanding of the history and heritage of the Port Phillip area.