Kay has lived on the same Port Melbourne street her entire life, despite moving house three times. Her father was born in South Melbourne and worked almost his whole career at Olympic Tyres.

Her parents were married at St Luke's Church in South Melbourne on 31 May 1941. The Sun News Pictorial published a photograph of the happy couple alongside another marriage that took place in London on the same day. 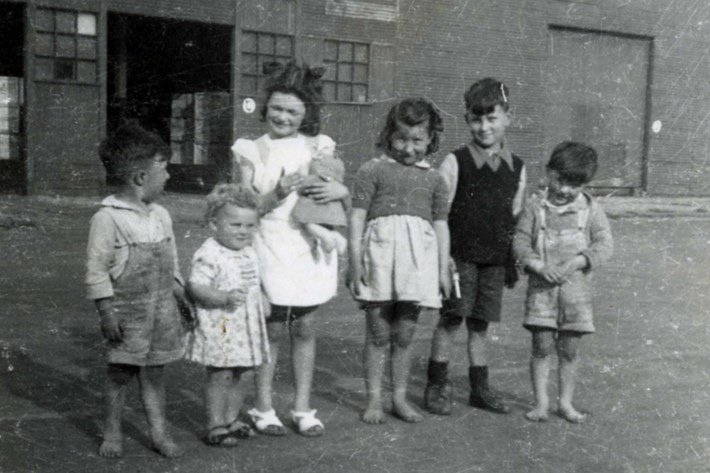 The headline – Blitz and Bliss Wedding – highlighted the extreme juxtaposition of the two couples, one standing outside the bombed ruins of a London church.

Kay was born a year later, and while she was too young to remember the war years herself, she has a strong recollection of family stories from the time.

Her father tried to join the war effort, first the air force and then the army, but he was rejected from both on account of his health. Undeterred, her father became a voluntary air raid warden, in charge of inspecting houses to ensure windows were properly blacked out, watching the skies and practicing air raid and fire drills in the event of an attack. Kay remembers seeing the gas mask and tin hat he used in the back of a cupboard growing up.

As the threat of an invasion from the Japanese grew, Kay's father decided he wanted to dig a shelter in his backyard to protect his family. Living in a tiny, typical four-room cottage in Port Melbourne at the time, the shelter was going to take up most of the backyard. Her father began digging while one of Kay's cousins was watching.

"My cousin kept trying to interrupt my dad and finally managed to get his attention just as he was about to put his pickaxe through the sewage pipe!"

Despite the near miss, Kay's father was determined to keep going. But upon seeing what he was doing, Kay's mother said she absolutely refused to use that shelter, even if bombs were dropping from the sky because it seemed so unsafe. After that, Kay's father gave up on the idea.

Kay had a cousin who was an artist. During the war, she went to work at the aircraft factory in Port Melbourne in the technical drawing department because of her artistic skill.

When the war was over, Kay recalls "seeing many returned servicemen with missing limbs around South Melbourne, probably because the prosthetics manufacturer was in Sturt Street, South Melbourne."

Kay had two uncles that served in the war, but like many men at the time they refused to discuss it when the returned. One had been a prisoner of war at Changi in Singapore.