The Port Phillip City Collection, dating from 1855, celebrates the social, cultural, political and artistic development of the City of Port Phillip and its former municipalities of Port Melbourne, South Melbourne and St Kilda. The Art Collection comprises historic works dating from the mid-1800s and contemporary artworks by artists who have lived or worked in the City. It recognises the diverse people, perceptions and places and describes the unique character of the City. Over time this Collection has been an indicator of the City’s diverse urban character and the significant creative output of the local community. The artworks in this walk date from the c1860s. 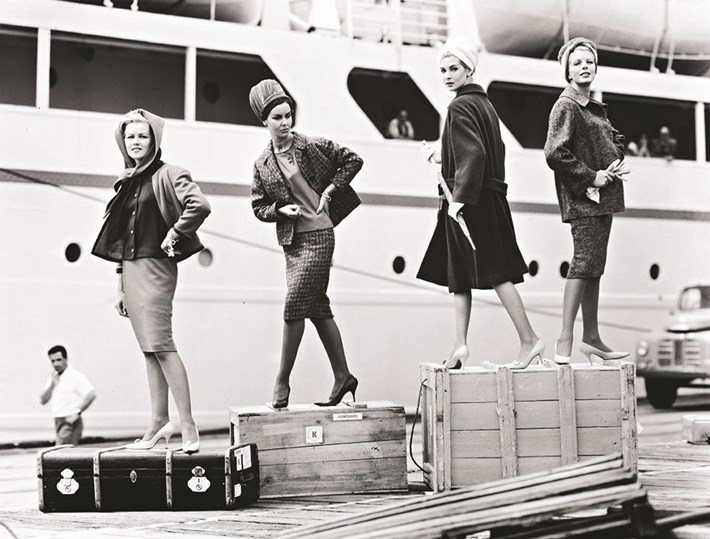 Born in 1925 in Massa Marittima, Italy, Benini migrated to Australia in 1935. He studied science at Melbourne Technical College and worked briefly at General Motors Holden at Fishermans Bend. In the 1950s, he joined Peter Fox Modern Photography Studio in Melbourne and established himself as a fashion photographer.

Benini became one of a group of influential émigré commercial photographers working in post-war Australia and is regarded as one of Australia’s most elegant and refined mid-20th Century fashion photographers.

Find out more about Bruno Benini.

Port Melbourne featured in Christopher Kerley’s 2013 exhibition, A Suburb Somewhere, which explored themes of alienation and dislocation in suburban environments. Notably lacking in Kerley’s work is the presence of the human figure. Instead, his work depicts the liminal spaces of the suburbs; the habitation of these spaces is only hinted at by the presence of objects such as rubbish bins, cars and ships as architectural structures.

Find out more about Christopher Kerley.

Get to the Greek 49 Beach Street Port Melbourne 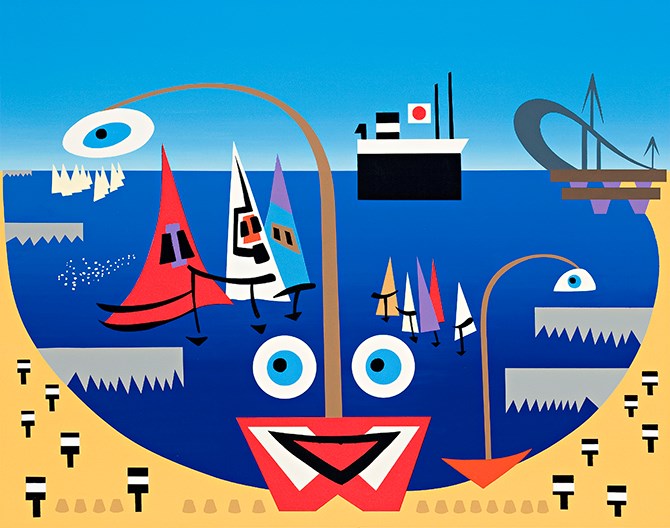 Tom Sanders was primarily known for his work as a ceramicist. He had a long association with the Boyd family which began in the mid-1940s at Arthur Merric Boyd Pottery in Murrumbeena. Later, while studying sculpture at the East Sydney Technical College, he worked with Guy and David Boyd.

During the 1960s and 1970s Sanders received many commissions in Melbourne, Sydney and Perth. By the 1970s Sanders was living in Port Melbourne and in the early 1980s produced a series of screen prints of the Port Melbourne foreshore that document leisure activities and industry in the area. 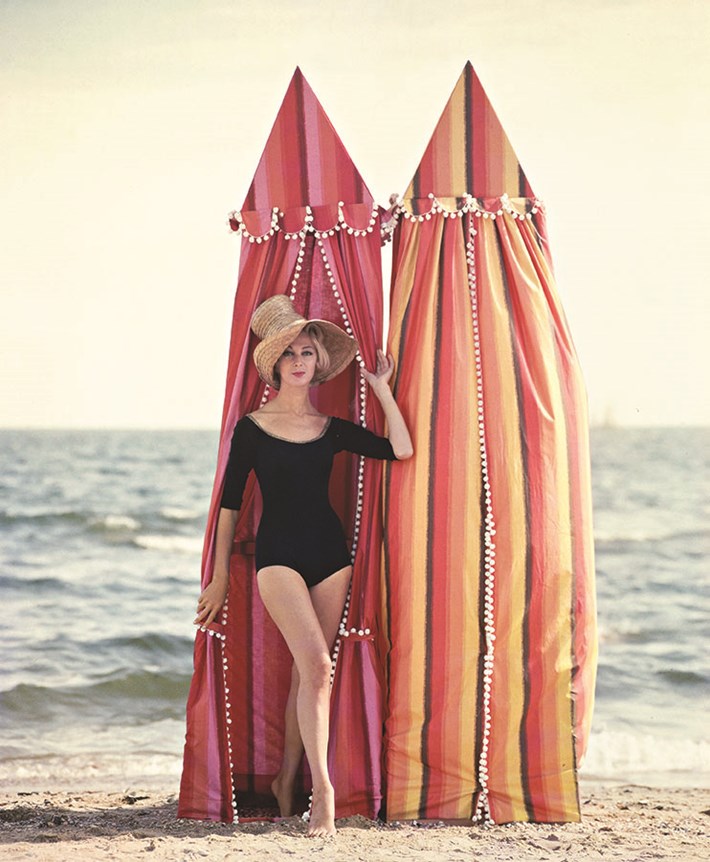 Born in 1925 in Massa Marittima, Italy, Benini migrated to Australia in 1935. He studied science at Melbourne Technical College and worked briefly at General Motors Holden at Fishermans Bend. In the 1950s, he joined Peter Fox Modern Photography Studio in Melbourne and established himself as a fashion photographer.

Benini became one of a group of influential émigré commercial photographers working in post-war Australia and is regarded as one of Australia’s most elegant and refined mid-20th Century fashion photographers. Benini shared a studio with Janice Wakely.

Find out more about Bruno Benini. 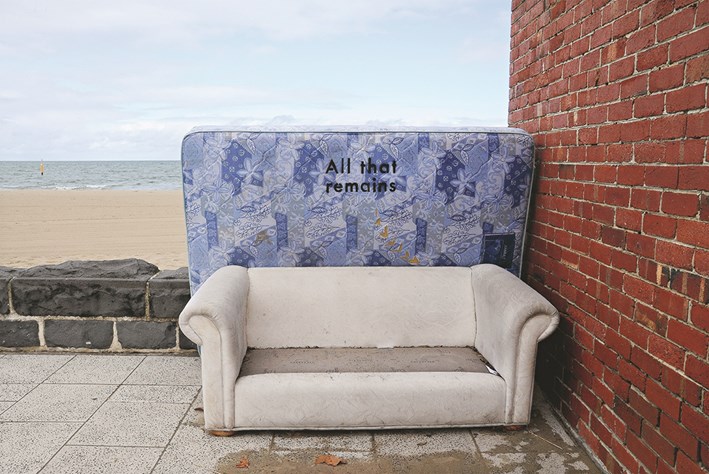 Julie Shiels, All That Remains 2005

All That Remains is part of the series The Things People Told Me, that records Julie Shiels’ ephemeral text interventions on urban waste. For this project Shiels transformed hundreds of abandoned objects on local streets with stencils of quotations and truisms sourced from the public domain, and occasionally by Shiels herself.

Shiels stenciled the furniture where she found it and took a photograph straight afterwards. As such, these images reproduce the prevailing light and weather conditions.

Find out more about Julie Shiels. 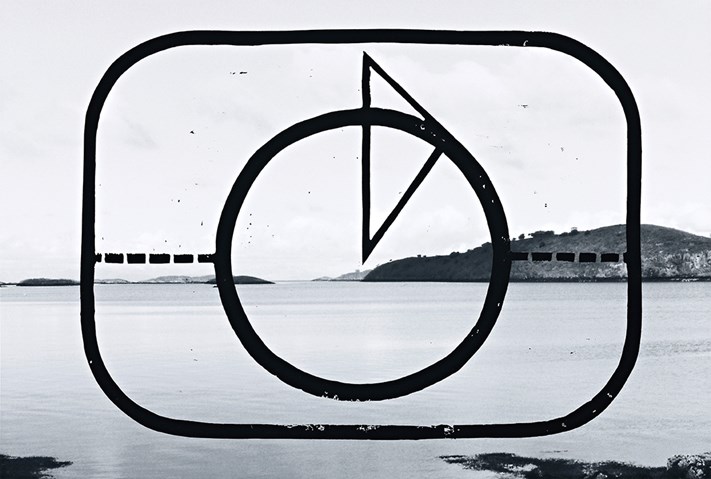 Emma Hamilton, Diagram for Navigation (Location of the Arctic Circle) 2017

Diagram for Navigation was developed at Fordypningsrommet Fleinvær, at a residency undertaken by Hamilton on a remote Norwegian island above the Arctic Circle in the archipelago of Fleinvær. The series of lino prints applied onto photographs of the Norwegian landscape depict diagrams that calculate our position in landscape. The all-encompassing landscape dominates life here; time is measured by light in its abundance or absence at different times of the year.

Find out more about Emma Hamilton. 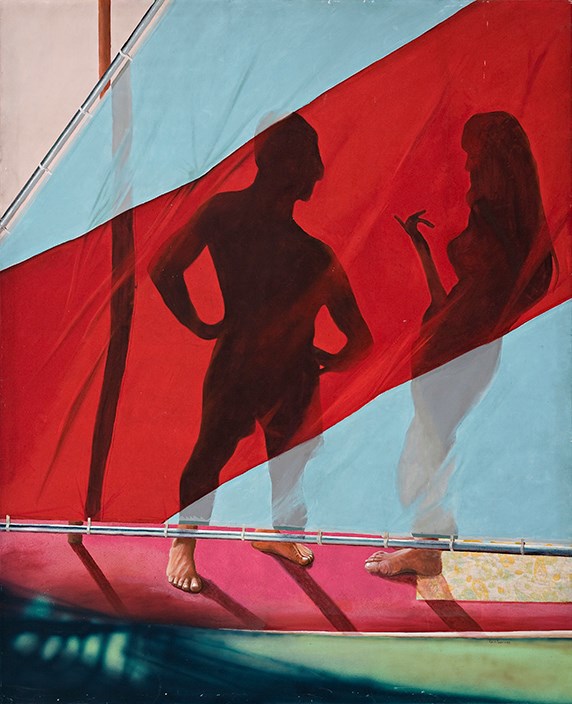 Raja Azhar Idris was active in the St Kilda area in the 1980s. He graduated with a degree in Fine Art from the Victorian College of the Arts, Melbourne, Australia, in 1981, the year when he won the Melbourne Lord Mayor’s Prize, and was voted the Artist of the Year by the Victorian Artists Society. He now resides in Malaysia.

Check the What's On St Kilda and Surrounds to find more great places to eat, drink and shop in St Kilda. 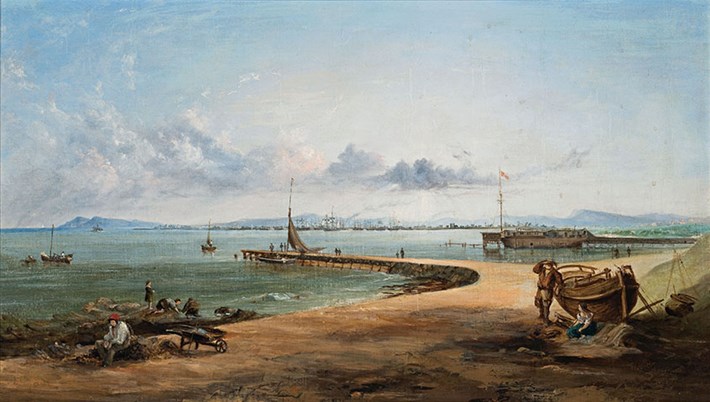 Elizabeth Parsons was one of the first professional female artists to work in Victoria. Between 1874 and 1889 Parsons produced many watercolour depictions of St Kilda, primarily of Red Bluff (Point Ormond). However, in 1875 Parsons turned to oil painting.

Find out more about Elizabeth Parsons. 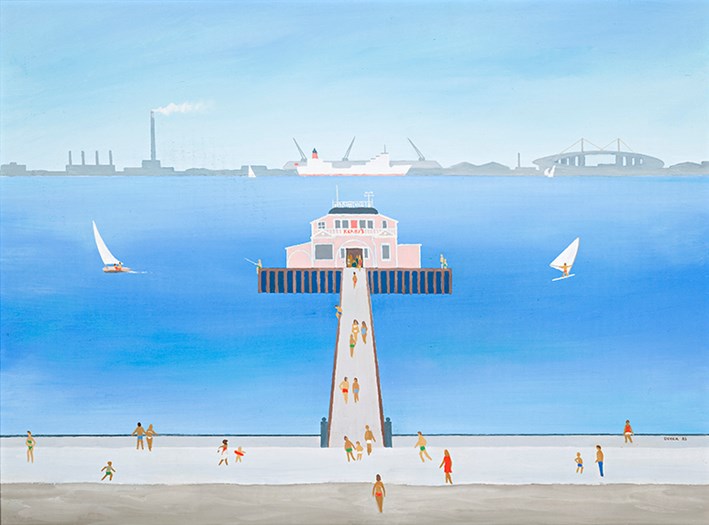 The St Kilda Pavilion is an historic kiosk located at the end of the St Kilda Pier. The kiosk was designed by James Charles Morell and built in 1904 by John W. Douglas. It was operated by Francis Parer and until the 1930s, the structure was widely known as Parer's Pavilion. However, its actual name was the Austral Refreshment Rooms.

Noble and Ivy Kerby acquired the lease in 1939 and it was renamed Kerby's Kiosk. The Kerby family operated the kiosk from 1934 until 1987. On 11 September 2003 the structure was destroyed in an arson attack.

After much public support to rebuild the kiosk it was reconstructed to the original 1903 plans, utilising some of the salvaged components, such as the cast iron roof, decorative cresting and weather vane. The kiosk reopened in March 2006. 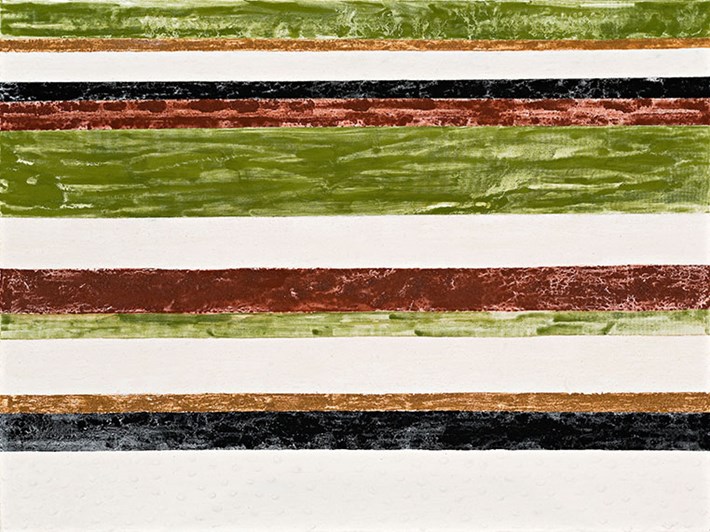 The crackled horizontal layers in Julie Gough’s Intertidal II suggests a succession of high-water marks left by the tide. Rhythms of tone and colour suggest the ebb and flow of the tide, the cyclical push and pull of the ocean.

There's a comforting certainty to those rhythms. But Gough has marked the point between tides, a point where the precise level of the ocean and the precise limit of the shoreline is unstable, only momentarily found between movements. This sense of momentary pause and gentle uncertainty is a timely reminder to all residents of the City of the fragility of our experience.

Find out more about Julie Gough. 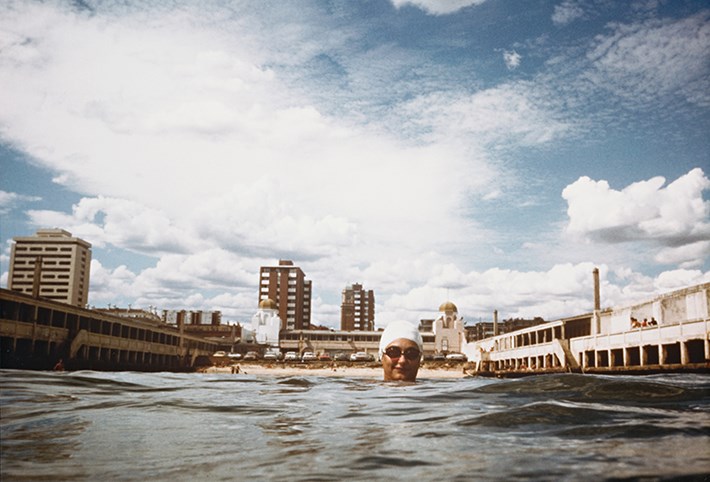 Martin Munz was educated in Melbourne and initially practised as a lawyer. He subsequently retrained as an artist and in the late 1980s became the director of the Tin Shed Gallery at the University of Sydney. Munz was a prominent photographer in the St Kilda area during the early 1980s and the Port Phillip City Collection holds several of his works.

Held on every Sunday from 10am, visit the iconic St Kilda Esplanade Market on The Esplanade St Kilda renowned for its unique arts and crafts. 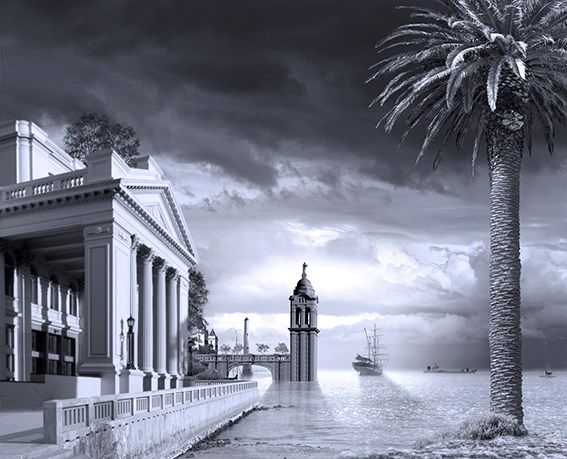 Depicting elements of the natural and built environments around the City, Luminist View 2 is a digital photographic landscape that brings together multiple points of perspective, different locations, times of the day and seasons.

These elements are arranged to create a seamless realism or familiarity. However this is a landscape that couldn’t possibly exist. This is an idea explored by Claude Lorrain, the 17th century exponent of the French Classical Baroque style, to present a view of nature more beautiful and harmonious than nature itself.

Find out more about Valerie Sparks. 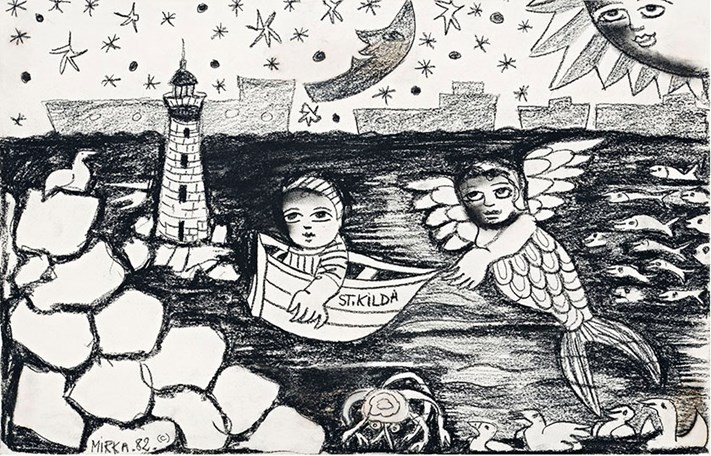 Mirka Mora is one of Melbourne's most revered and treasured artists. Mirka and Georges Mora immigrated from France in 1951 and made an everlasting impact on Melbourne's cultural fabric. They introduced their European-style dining to 1950s Melbourne, opening The Mirka Café in Exhibition Street, The Balzac in East Melbourne and The Tolarno French Bistro in St Kilda in 1967.

Find out more about Mirka Mora.

On your way to Fitzroy Street? Dine at Bergerac at Tolarno 42 Fitzroy Street St Kilda to see Heritage Listed murals and a wall sculpture by Mirka Mora.

Visit the Renew Fitzroy Street stores including 77 Fitzroy Street St Kilda with stunning mural Mirka Mora, portraying her as both a young and older woman painted by Tom Cerdan. 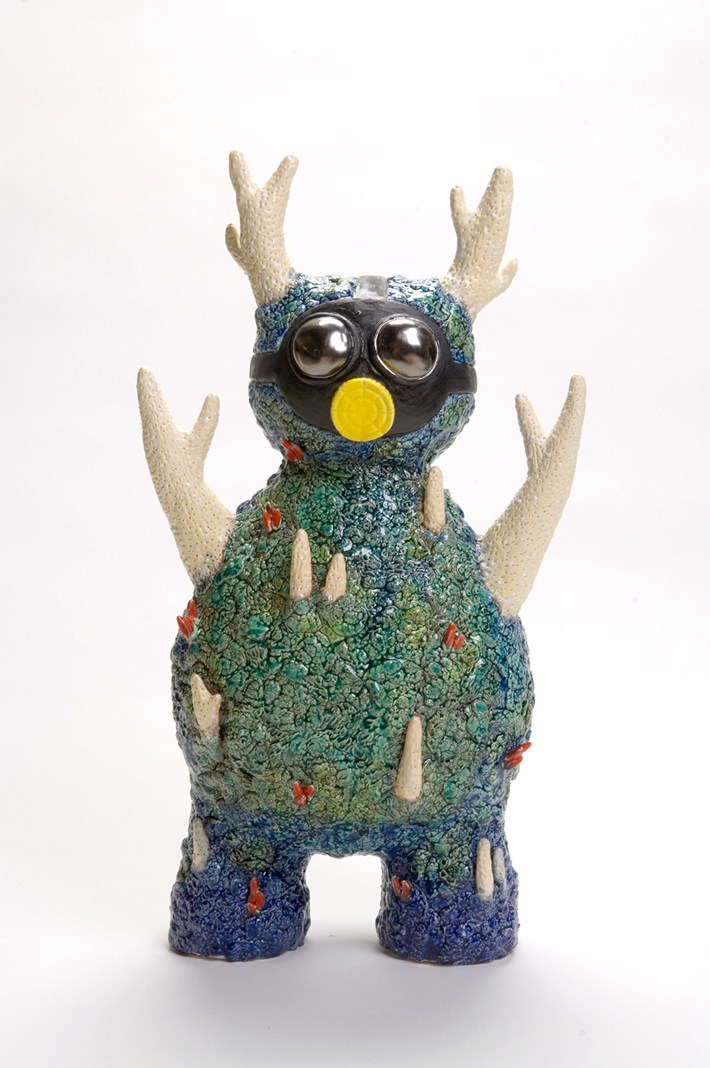 Despite the humorous characteristics of Soothing Remedy, the underlying
subject matter refers to societal attitudes towards overindulgence. The artwork, inspired by figurines of plump Chinese court ladies located in the Ming Tombs of Beijing, was created to raise awareness of the deterioration of coral reefs and eco-systems in Australia and Thailand. However, the work highlights the bigger global issue of the environmental impact of excessive consumption.

Check the What's On St Kilda and Surrounds to find more great places to eat, drink and shop in St Kilda. 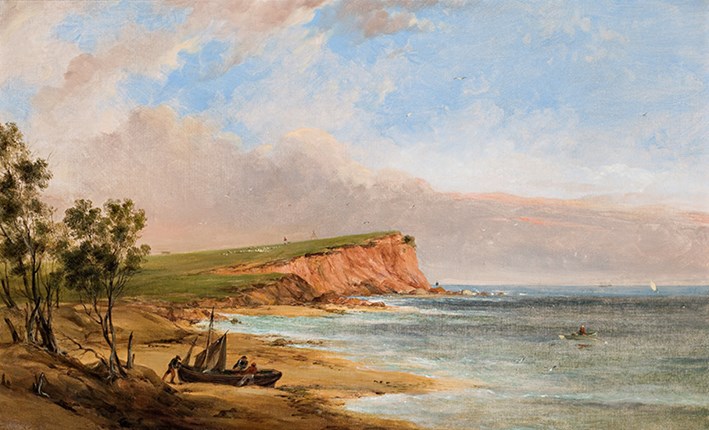 Bay Trail - at intersection of the Elster Creek

The original rocky headland of red sandstone, known as Little Red Bluff, was a striking feature in the area of Elwood. The site has a varied history. The Yaluk-ut Weelam clan of the Boon Wurrung used this bluff as a site for gathering. In the 1840s, Red Bluff was used as a quarantine station and small burial site in response to a typhoid outbreak on board the ship, GlenHuntly.

By the 1860s it was the site of the St Kilda abattoirs and in the early 1890s, it was bored in search of coal. Over time the base and nose of the cliff were eroded. This natural phenomenon was accelerated in the 1890s, by the removal of stone and earth from the base of the cliff, which was used as landfill in the reclamation of the swamplands that once covered much of present-day Elwood.

In the late nineteenth century the name of the site was changed from Red Bluff to Point Ormond.

Find out more about Thomas Clark.

Check the What's On St Kilda and Surrounds to find more great places to eat, drink and shop in Elwood.