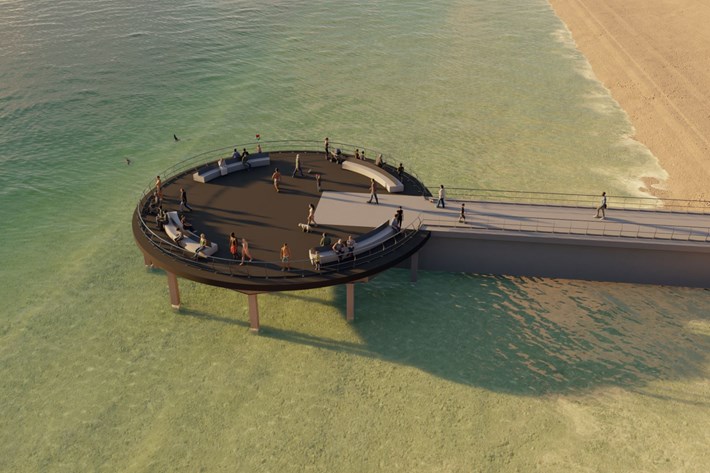 Construction commenced in early 2021 and is expected to be complete by late 2021 to replace the Shakespeare Grove main drain outlet on St Kilda Beach and construct a new viewing platform.

The drainage system, including drain outlets, plays an important role in taking stormwater safely away from properties, roads and built-up areas, which minimises the impacts of flooding.

By delivering a viewing platform, the project will also create a destination point for the community to enjoy.

Construction will impact the surrounding area, including access to public carparks. For more information visit What to expect during construction.

Further information about this is available on the Melbourne Water website.

Brookes Jetty previously extended over the top of Shakespeare Drain and out into the Bay.

At the Council meeting on 27 October 2016, Councillors unanimously passed a motion about Brookes Jetty following community concerns about its removal by Parks Victoria.

The motion states that Council:

Community members raised concerns about Parks Victoria’s removal of Brookes Jetty in St Kilda in 2015. Parks Victoria acknowledged to Council they did not sufficiently notify the community in advance.

Parks Victoria advised that the jetty has been the location of at least one fatality and several serious spinal injuries in recent years. The City of Port Phillip supports efforts to reduce water related deaths and injuries.

Council had no authority regarding the jetty as it was not subject to a heritage planning overlay so any works undertaken by the public land manager (Parks Victoria) do not require planning approval.

The jetty was not able to be used by boats as it was in a no-boating zone.

Note:  Brookes Jetty is owned by Parks Victoria (not Council) and is not listed or subject to heritage overlays