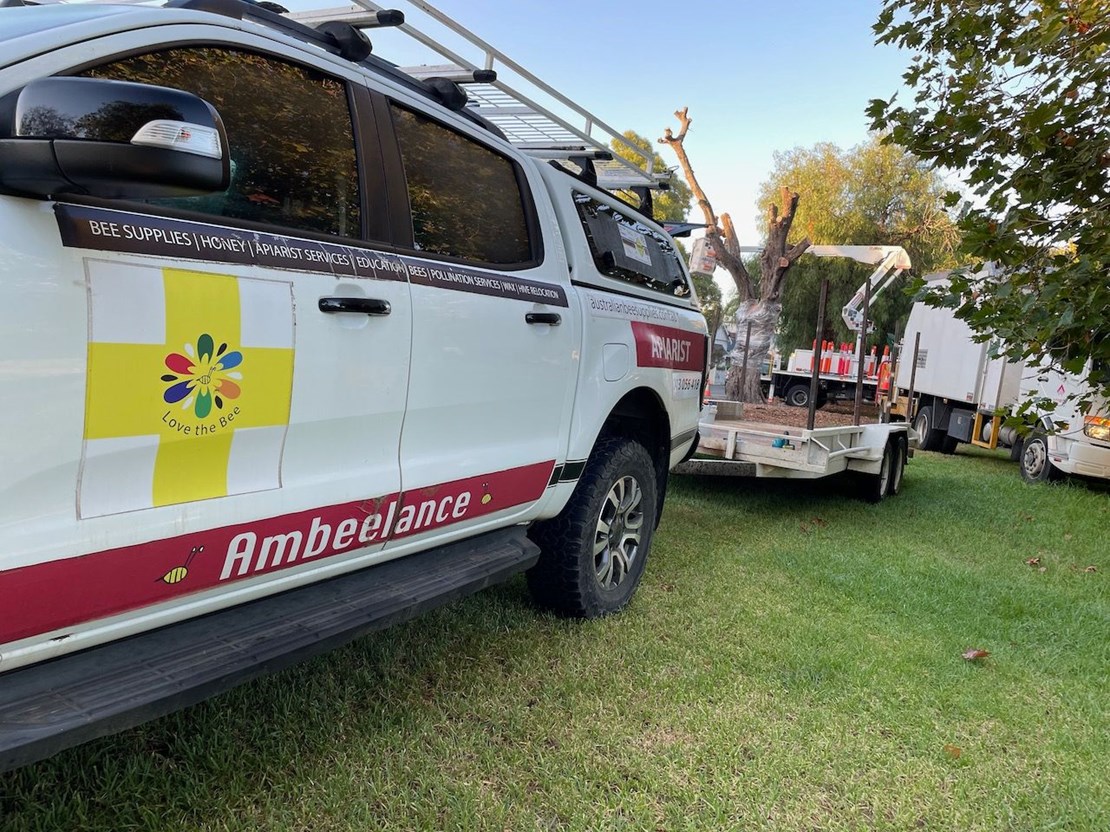 The hive’s honeycomb on its side after being removed from the tree.

Forty thousand bees have been safely moved from a dying tree in a Port Melbourne park.

Hester Reserve was abuzz when our contractors, working with Australian Bee Supplies (ABS), carefully removed the hive and placed the bees in a temporary new home.

“Many local residents stopped and congratulated us on the work to relocate the colony, rather than euthanising the bees,” ABS chief apiarist Andrew Stanish said.

The 1.3 metre high hive, weighing 25 kg, was revealed in a hollow of the Peppercorn tree after a tree limb broke off.

The delicate removal operation included vacuum extracting the bees from the tree and housing them until a brood comb (the beeswax cell structure where the queen lays her eggs) had been re-established in a temporary hive.

It took about 10 hours for the hive to be removed and the bees settled in their temporary home. They are now in their second and final stage of quarantine to ensure the queen is laying and the colony is free of disease before being moved to a permanent home.

There are three castes of honey bees: Queen bees (egg producers), worker bees (infertile females),and drones (males whose purpose is to find and mate with a Queen bee). They perform many different jobs including nectar and pollen collecting, cleaning cells after babies are born, attending to the Queen and even removing the dead (mortician bees).

Andrew said the colony is living the sweet life. “They are docile and happy little girls. They are bringing in nectar and pollen, suggesting babies are being made.”

“Most of them are girls. The drones are boys, they essentially eat, party and mate with the queen,” Andrew said. “Bees are just brilliant and have such fascinating behaviour.”

In a similar success story, two honey bee hives are thriving after being relocated to the St Kilda Botanical Gardens in 2020 after a Newton Court Reserve tree needed to be replaced.

This article is featured in the March edition of Divercity. Divercity brings you the latest City news, what's on, service updates and local exclusives, such as discounts and freebies. To keep up to date with news about your City and Council, sign up now.