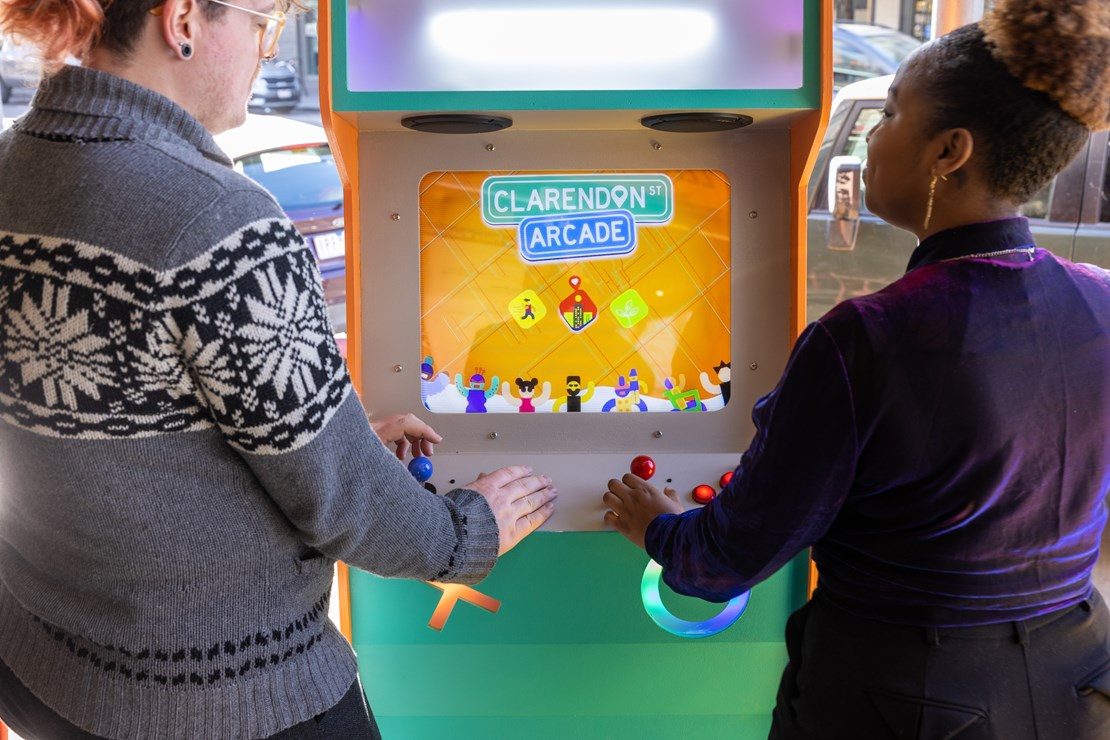 The Clarendon Street Arcade encourages social connection through five creative arcade games, each reimagined through a contemporary lens. The games are yet another reason to visit Clarendon Street’s engaging cafes, restaurants and shops.

The arcade gaming trail is supported by Port Phillip Council, funded under the Victorian Government’s COVIDSafe Outdoor Activation Fund and developed in partnership with RMIT Future Play Lab. The games are:

• 10-in-1 Arcade by Master of Animation, Games and Interactivity students
A classic arcade cabinet featuring 10 games controlled by a joystick and buttons. Everyday objects become playthings in these surreal and colourful games.

• Musimoji by Troy Innocent and Allison Walker
Up to three players play together to create music from emojis. Clustered around a monolith rising from the street, players tap buttons to change, release or supress emotions.

• Jukebot by Future Play Lab in conjunction with musicians and producers
A game with no screen and 32 multicoloured buttons which light up and play a sound from electronic musical compositions. The aim is to create a contemporary jukebox that is free to play but requires more than just a push of a single button.

• Yawa by N’arweet Carolyn Briggs AM, Jarra Karalinar Steel and Narayana Johnson
Yawa means journey in Boonwurrung language. Four-players join an onscreen adventure across an abstract map of Country discovering stories as they go. The aim is to work together in exploring the world as each player co-operates to reveal each part of the map.

• Yomeci Arcade by Yomeci Play
A game which sees the player stand above a virtual hole in the ground which connects the player to a subterranean world. The player uses their feet to step and jump on buttons as they journey through an underground world.

The project is supported by Experience South Melbourne and includes a launch event at Dessertopia (342 Clarendon Street) from 3 to 6 pm, Tuesday 26 July.
Additional lighting has been installed around each arcade installation allowing the gaming action to continue after dark in a boost for night-time trade.

The games are expected to remain until the first week of October to coincide with the Melbourne International Games Week. Council’s Games Action Plan 2020-24 positioned Port Phillip to become the games capital of Victoria.

Port Phillip Mayor Marcus Pearl said: “Bringing free, creative arcade games to Clarendon Street helps our traders who are still doing it tough. It also shows our commitment to Port Phillip becoming home to an even bigger, thriving games sector that will help drive our local economy and further cement our longstanding reputation as a creative city.”

Dr Troy Innocent, Future Play Lab, RMIT University said: “Urban play connects people and place with design and cities, making them vibrant and liveable, reflecting their creative, linguistic, cultural, social and urban diversity. With the Clarendon Street Arcade we wanted to experiment with what arcade games can be, particularly in an urban environment. I’m interested in the impact of urban play on public spaces post-pandemic. This project plays into that in a number of ways – through activation of local businesses in Clarendon Street, connecting local artists and designers with public space, and the ways that urban play can reimagine and reshape place.”

This article will feature in the July/August edition of Divercity. Divercity brings you the latest City news, what's on, service updates and local exclusives, such as discounts and freebies. To keep up to date with news about your City and Council, sign up now.